Today’s Challenges in Healthcare IT 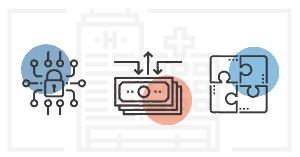 Just a few years ago, healthcare executives were worried about EHR adoption, meaningful use, and HIPAA compliance. In the current scope of healthcare, HIPAA compliance is mainly focused on privacy and security. While adoption is still high on the CIO priority list, meaningful use and healthcare reform are not as prominent as they once were with  Things have drastically changed over the years and now, more than ever, healthcare organizations are faced with new challenges. In a recent blog post, we discussed the new 1,883-page proposed rule Centers for Medicare & Medicaid Services (CMS) released that will rename and rebrand Meaningful Use as Promoting Interoperability. This change is a prime example of the challenges in healthcare IT and how the rules are continually changing.

First and foremost, system breaches. According to a recent IBM security report, 47% of breaches involved cases where hackers placed malicious data on a machine or server designed to disrupt the behavior of a system or network. The amount of healthcare data breaches continues to grow year-over-year. In a never-ending cat-and-mouse game, healthcare organizations move to increase their security measures in one area, as attackers are finding new ways to access their systems to compromise the organization and steal or compromise data. Whether it is ransomware, data breaches, or IoT (Internet of Things) risks, the healthcare industry is under attack from many different angles. Healthcare organizations are forced to spend increased amounts of money on security, and while it may not be the top expenditure, it is a priority. Where once an organization could get away with one or two security professionals, many organizations are now employing entire departments dedicated to cybersecurity. The industry as a whole faces the increasing risks associated with protecting the data entrusted to them by their customers.

While meaningful use brought some compliance requirements, transitioning to new payment models adds another layer of requirements and burden to healthcare organizations. Healthcare providers are changing their economic incentives to focus on value over volume. Traditionally, healthcare relied on a fee-for-service model. Every time a patient visits and receives a service, the healthcare organization was paid by the insurance company and then by the patient.

Another challenge that healthcare organizations now face in a very competitive healthcare market is whether they should look into acquiring another organization or try to be acquired themselves. Mergers and acquisitions are prevalent in today’s healthcare landscape for a straightforward reason: As we discussed in our M&A Success Dependices blog post, the shift from volume-based care to value-based care has challenged healthcare organizations to improve care delivery, and that has been a fueling factor in the incredible rise in merger and acquisition activity over the last several years.

For the most part, mergers & acquisitions in healthcare come down to dollars and cents. With mergers come the cost savings of consolidating functions, such as administration and IT, and in some cases overhead, such as buildings and machinery. Mergers & acquisitions allow organizations to tighten operations, streamline services, and increase access to capital. But, there must remain a focus on the people involved, the best interests of both employees and patients and how the merger impacts them, to achieve optimal success.

Population Health is yet another challenge facing healthcare organizations today. The healthcare outcomes of a group of individuals in an area that a hospital serves are often geographic populations such as nations or communities, but can also be other groups such as employees, ethnic groups, disabled persons, prisoners, or any other defined group. The health outcomes of such groups are relevant to policymakers in both the public and private sectors. Population health is not just the overall health of a population but also includes the distribution of health. When considering the importance of population health, it is necessary to reduce health inequities or disparities among different population groups due to, among other factors, the social determinants of health, SDOH. SDOH include all the factors (social, environmental, cultural and physical) that the different populations are born into, grow up and function with throughout their lifetimes which potentially have a measurable impact on the health of human populations.

Without a doubt, a transformation in healthcare is underway as the industry evolves, so must its technological offerings, support models, and personnel. However, it is interesting to note that while the industry and technology change and the challenges of the industry develop, the focus of healthcare, the systems that support it and the people that protect it, must always remain on the patient. Improving patient care is THE priority for everyone involved. From the doctor or nurse at the bedside to the EHR analyst and the IT security professional – everyone must remain focused on improving patient care. It’s the only way to successfully navigate the unfamiliar waters ahead.

Make sure to subscribe to our blog for the latest thought leadership in healthcare IT delivered directly to your inbox.  You can also follow us on LinkedIn, Twitter, and Facebook to join the conversation.